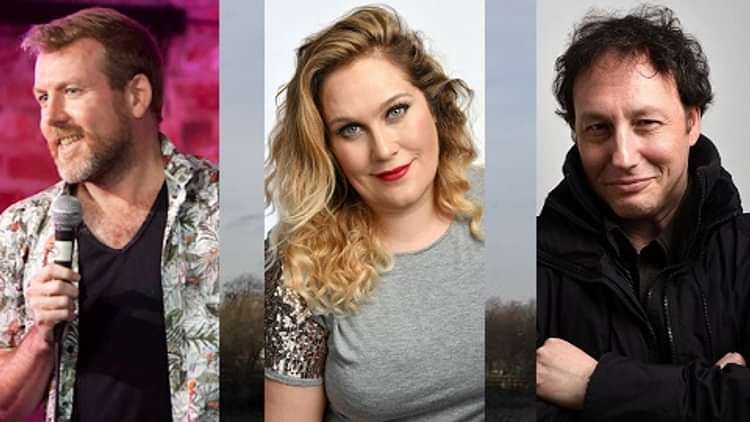 Almightily Great Things shall be Afoot at the HORNS Comedy Club on Wednesday 3rd November. The world-renowned Jazz Room of the galaxy-renowned Bulls Head in Barnes SW13 shall on this night play host to the… really quite reasonably renowned and awfully funny LUCY FREDERICK and CAREY MARX, and I commend this bill to the house. Everyone’s house.

Here’s the gen on the show: Tickets £9 in advance (INC. booking fee!) or £11 on the night on the door. The Bull’s Head is totally cashless by the way. Doors Open 7.30pm. Show is at 8.00pm. Should finish around 10 o’clock. Bar in venue open before and after show and during the interval. There ARE toilets… I can’t stress that enough.

Lucy Frederick Lucy Frederick is a comedian, actor and writer based in South East London. She started out training to be an actor at the prestigious East 15 Acting School, graduating in 2003. Since then she has worked in all sorts of professions such as education, animal nutrition, fat modelling and backing dancing*. But now she’s doing stand up comedy. Which is nice.

She is a regular on the comedy circuit having appeared at The Top Secret Comedy Club, The Stand and Just the Tonic amongst lots of others. She is also a resident MC at South London’s friendliest comedy club, The Poodle Club.

When not on the stand up circuit, Lucy is becoming well known at the Edinburgh Fringe for her “eye wateringly honest” (The Scotsman) shows about the human condition.

Lucy loves spending time pretending to read but actually watching the telly with her other half and two brilliant** step-children. And the genuinely marvellous*** Jack Russell.

Seriously, the backing dancing thing is real – someone threw a glow stick; it was dangerous. *Brilliance dependent on how hungry/grumpy Lucy is. ***Genuinely bloody marv.

Carey Marx Carey Marx has been a circuit favourite for years, mixing his own blend of dark humour with a mischievous and gleeful delivery. His wilful disregard for the controversial and delicate is tempered beautifully by his ability to find joy in the most unexpected places. This hilarious mix of edgy topics and playful gagsmithery can be seen at all the top clubs across the country with Marx regularly playing Jongleurs, Komedia and The Comedy Store and annually compèring the largest festivals.

Carey has taken numerous critically acclaimed shows to Edinburgh Festival Fringe over the years. His 2013 show, Intensive Carey, was so successful that it was picked up by BBC Radio 4 in 2015 and developed into a R4 special.

Carey regularly headlines the best clubs in the country and plays at the most prestigious festivals. His first solo show to appear at the Leicester Comedy Festival won a nomination for Best Show, and he was nominated for 2017's Best Club Comic (an award formerly titled best headliner) at the Chortle Awards.

Carey has performed all over the world including a run in the Middle East. In 2010 he embarked on The New Zealand Comedy Festival for the first time where he quickly scooped the award for Best International Show.

In 2011 Carey returned to the New Zealand Comedy Festival to perform, where he was awarded the prize of Best International Show for the second time, making him the only act in the history of the festival to achieve such a feat.