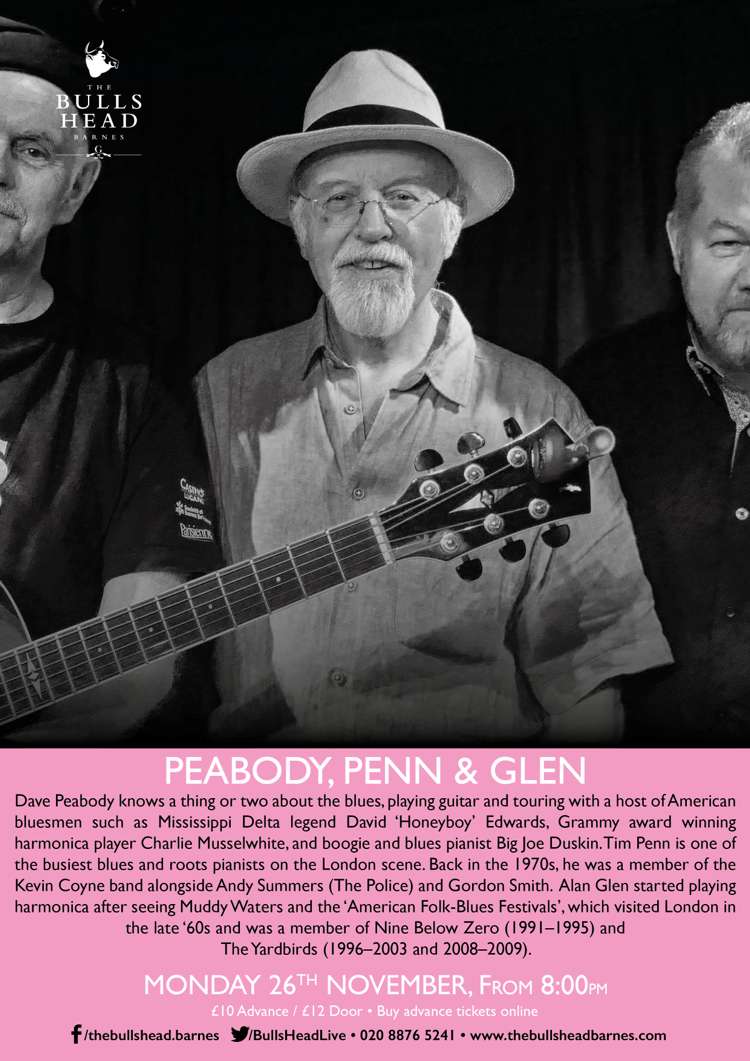 Three of the finest players on the British Blues scene featuring Dave Peabody (vocals, guitar), Tim Penn (vocals, piano) & Alan Glen (vocals, harmonica). Dave Peabody knows a thing or two about the blues, playing guitar and touring with a host of American bluesmen such as Mississippi Delta legend David ‘Honeyboy’ Edwards, Grammy award winning harmonica player Charlie Musselwhite, and boogie and blues pianist Big Joe Duskin. Perfecting his craft with over fifty years of live performances and appearances on over forty albums and CD’s, he has been voted UK Acoustic Blues Artist of the Year three times. Tim Penn is one of the busiest blues and roots pianists on the London scene. Back in the 1970s, he was a member of the Kevin Coyne band alongside Andy Summers (The Police) and Gordon Smith. He currently holds down the piano chair with the top swing-blues band, The Cadillac Kings as well as leading his own New Orleans R&B band, The Second Line and his enthusiasm for the music and infectious stage presence always guarantees a great evening. Alan Glen started playing harmonica after seeing Muddy Waters and the 'American Folk-Blues Festivals', which visited London in the late ‘60s and was a member of Nine Below Zero (1991–1995) and The Yardbirds (1996–2003 and 2008–2009). Alan has played on over fifty albums including six albums with Little Axe and recorded with Jeff Beck, Steve Vai, ‘Slash’, Skunk Baxter, John Mayall and Peter Green as well as playing Montreux and Nice Jazz Festivals and many of London most prestigious venues.