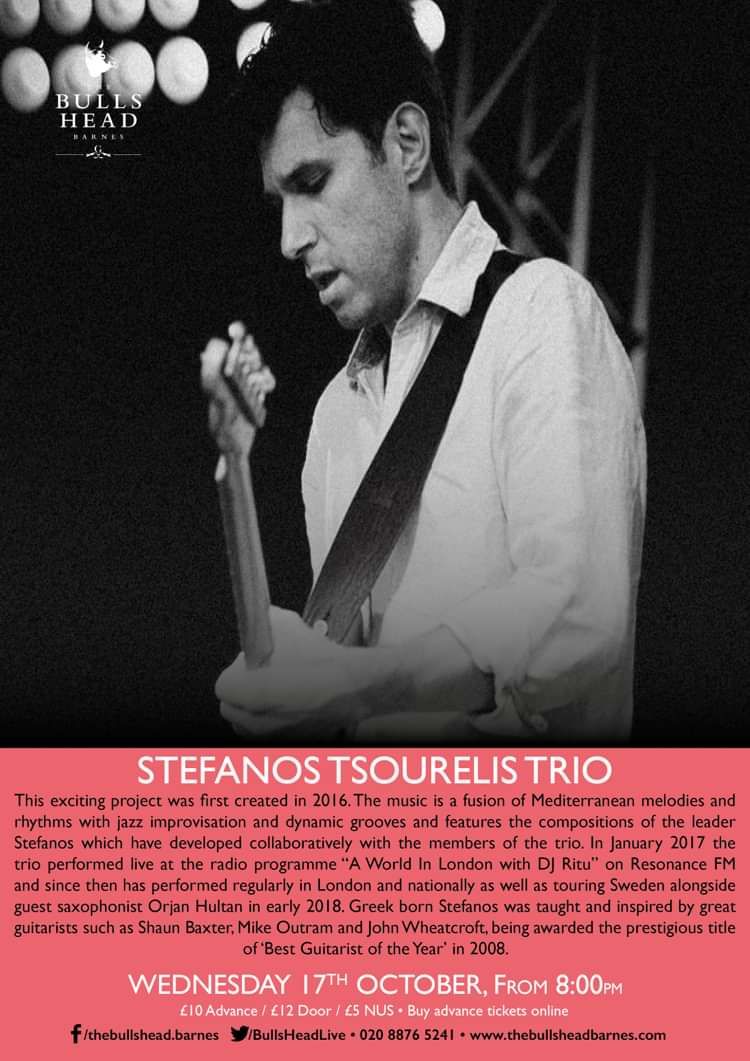 Featuring Stefanos Tsourelis, guitar and oud, Dave Jones, bass and Eric Ford, drums this exciting project was first created in 2016. The music is a fusion of Mediterranean melodies and rhythms with jazz improvisation and dynamic grooves and features the compositions of the leader Stefanos which have developed collaboratively with the members of the trio. In January 2017 the trio performed live at the radio programme “A World In London with DJ Ritu” on Resonance FM and since then has performed regularly in London and nationally as well as touring Sweden alongside guest saxophonist Orjan Hultan in early 2018. Greek born Stefanos was taught and inspired by great guitarists such as Shaun Baxter, Mike Outram and John Wheatcroft, being awarded the prestigious title of ‘Best Guitarist of the Year’ in 2008. He is well known for his versatility and ability to move across styles and genres on both the Guitar and Oud, and his musical style incorporates Blues, Rock, Jazz and Mediterranean sounds. His influences include Jim Hendrix, SRV, John McLaughlin, Pat Metheny, Jeff Beck, Wes Montgomery and many more. Bassist Dave Jones' writing has been described “… sophisticated and nuanced … just when you think you know where he’s going, there is a change of texture or tempo, you do find yourself in an unexpected place and …. “ London Jazz News. In recent years his playing has placed him alongside musicians Steve Gadd, Keith Carlock & Ronnie Scott’s Soul and Jazz Orchestra. Drummer Eric Ford, member of acclaimed contemporary jazz trio, Partikal, brings many different textures to this trio, often using percussion alongside a full drum kit, his playing full of empathy, alongside of intense solos of high energy expression.