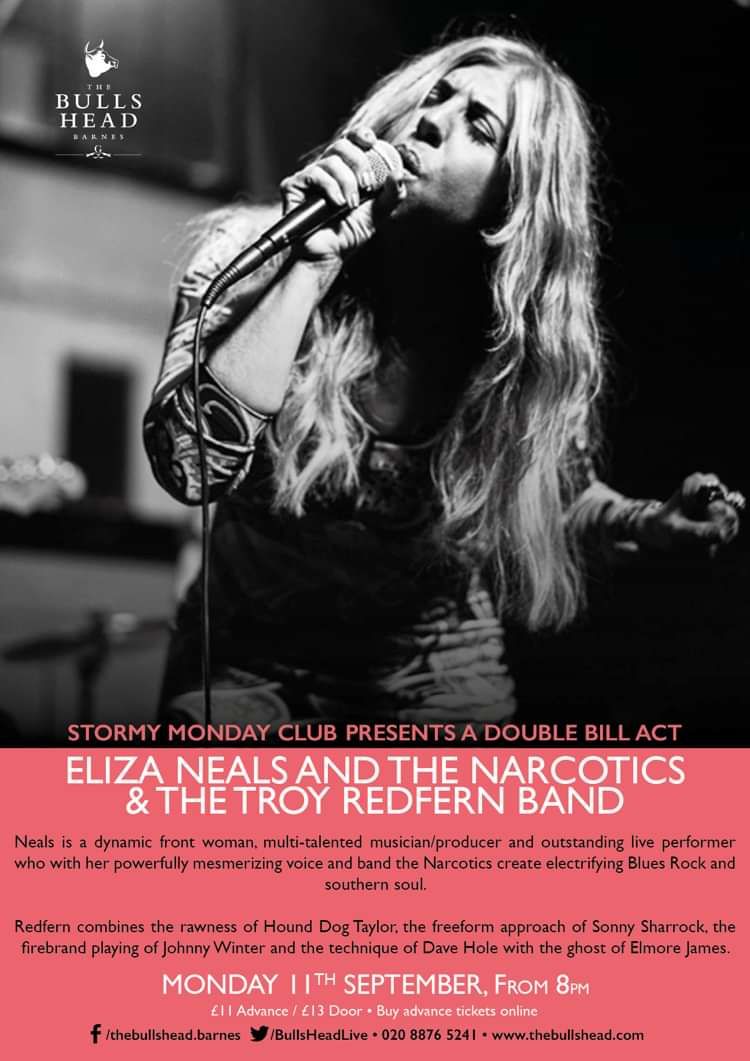 Troy Redfern Band: The protean slide guitarist leads his power trio with style, gusto and virtuoso playing that fuses spontaneity with real craft. Redfern combines the rawness of Hound Dog Taylor, the freeform approach of Sonny Sharrock, the firebrand playing of Johnny Winter and the technique of Dave Hole with the ghost of Elmore James. Troy is a guitarist for whom tone, feel and grooves are his working tools, while his songs range from a whisper to a scream, including those outlandish moments when his vocals go to the edge of the world and he momentarily transforms himself into Screaming Jay Hawkins meets captain Beefheart. Troy: “I write a riff first, then improvise the lyrics and then I pick some phrases etc and turn them into the song. I usually leave a section for the solo which is usually a one take deal. I love the ad-hoc energy that comes from somewhere else.”

Eliza Neals: “Eliza Neals sings with the power of Beth Hart, the emotion of Janis Joplin, yet the voice is still her own… blending rock and blues seamlessly …..” US Blues Scene. The Detroit Music Award winner has received the highest critical acclaim from both sides of the pond where comparisons have been made with Beth Hart and Janis Joplin. Neals is a dynamic front woman, multi-talented musician/producer and outstanding live performer who with her powerfully mesmerizing voice and band the Narcotics create electrifying Blues Rock and southern soul. Eliza performs on piano, Rhodes and Hammond B3 and on her last trip to the UK in 2016 was voted "Best Live UK ACT" by GetReadyToRock UK out of hundreds of bands. Her new album "10,000 Feet Below" out in February 2017 has received rave "masterpiece" reviews and was #1 in NY for a month straight and #2 on the BluesRock radio charts. Her guitar player Howard Glazer is in the Michigan Blues Hall of Fame and has toured 23 countries playing the blues and with Eliza Neals they bring crowds to their feet; reminiscent of Classic Blues-rock of the late 60's and 70' they are the Janis Joplin and Johnny Winter of the modern era. The band’s combination of Blues Rock & Psychedelic Soul with a twist of southern rock covers the spectrum showcasing their masterly original compositions with well-chosen covers.