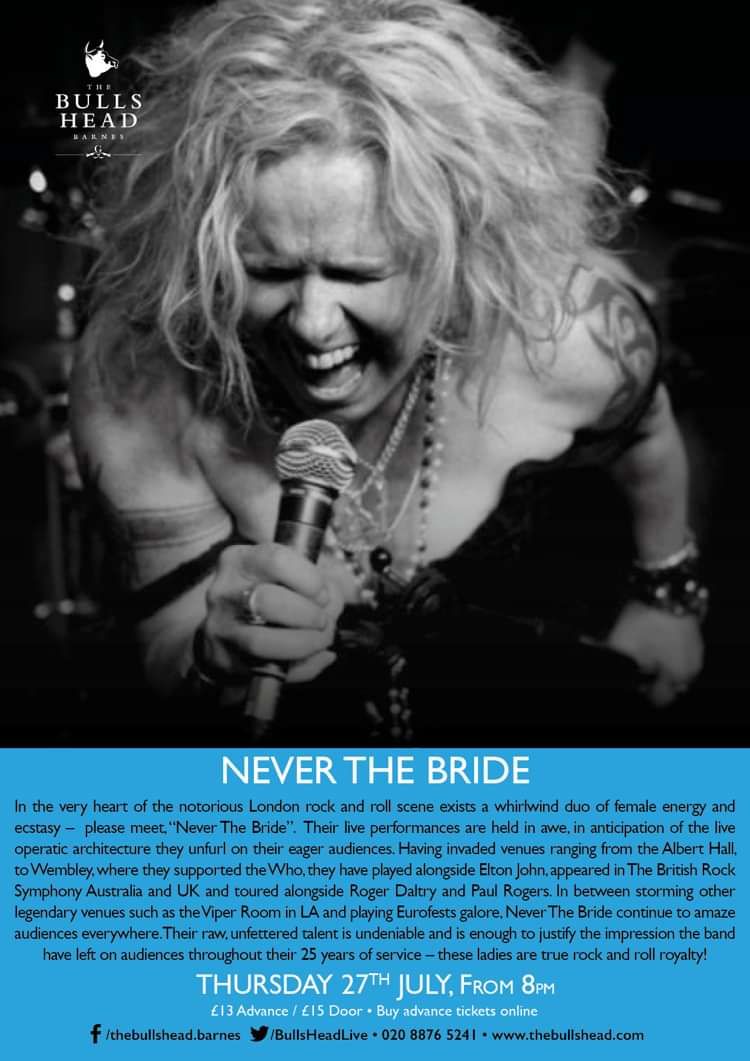 In the very heart of the notorious London rock and roll scene exists a whirlwind duo of female energy and ecstasy – please meet, “Never The Bride”. Their live performances are held in awe, in anticipation of the live operatic architecture they unfurl on their eager audiences. Having invaded venues ranging from the Albert Hall, to Wembley, where they supported the Who, they have played alongside Elton John, appeared in The British Rock Symphony Australia and UK and toured alongside Roger Daltry and Paul Rogers. In between storming other legendary venues such as the Viper Room in LA and playing Eurofests galore, Never The Bride continue to amaze audiences everywhere. Roger Daltrey is quoted saying: “Nikki Lamborn has the best female rock voice since Janis Joplin and I know what I am talking about … I knew Janis”. Dame Shirley Bassey called the girls “inspirational” and they have performed shows for both Cher and Liza Minelli. “One of the best live bands in Britain … ” said BBC Radio 2’s Bob Harris. The ladies roll-call list is simply mind-blowing, as are the stories they share and the 6 albums they have released. Bristol born Nikki Lamborn carries the dynamo vocal lead, while Glaswegian, Catherine ‘Been’ Feeney asserts the ‘sonic art’ with keys and vocals. Their raw, unfettered talent is undeniable and is enough to justify the impression the band have left on audiences throughout their 25 years of service – these ladies are true rock and roll royalty!